Video should start at 4:50 to see explosion scene

In the scene, Tom Cruise is just passing the middle of the white car as the explosion hits and he ends up just past that point when he makes contact with it. This car is a dodge stratus which is approximately 192" in lengh. He seems to have moved about half the distance of a door which is about 24 inches. It appears that he is about five feet from the car at the time of impact which is about  60 inches. Using basic trigonometry: 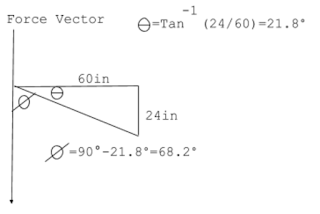 The angle Φ which is about 68.2 degrees west from the force vector represents the incorrect path that Ethan Hunt traveled in the scene.

In this scene, Tom Cruise is on the top of a building in Shanghai and wants to get to another one as quickly as possible. In order to do so, he attatches a cable to himself from a pulley that has the cable spooled around it. Is it really possible for Tom Cruise to reach the height of the next building? Tom Cruise is falling for 13 seconds before the pulley runs out of cable and the tension in the cable keeps him supported. To determine the answer to this question, we would need to use conservation of energy.

What we would need to measure:

Height he reaches on other building: 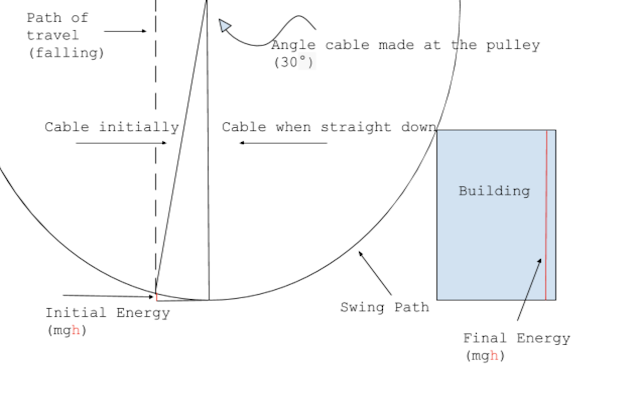 The initial and final energy of Tom Cruise consists solely on his potential energy at both positions since his downward velocity is close to being perpendicular to the circular path of his cable swing.

From the diagram above, his initial height is much smaller than his final height.

Thus, his journey from one building to the other was not possible. [-]

During the latter half of the movie, Tom Cruise is in Shanghai and is trying to find his wife. While desperate to find her, he calls one of his friends who works in intelligence at the Impossible Task Force control base. He learns that he needs to run about a mile through busy streets in order to get to her.

The elapsed time that it takes him to run one mile is about one minute and fifty seconds. At what speed must he run in order to accomplish this stunning mile time?

What we need to measure:

The man had to run 32.7 mph. The movie shows him stopping many times for cars and people so he was not always running. For comparison, Usain Bolt runs 27.8 mph without stopping. This does not check out. [-]