Interstellar's Display of a Wormhole and the Physics Behind It 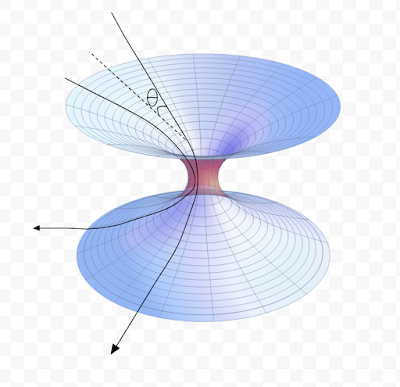 The movie Interstellar displayed many astrophysical phenomena of which had barely ever been displayed in major motion pictures before. In able to gain a good foundation for the physics behind wormholes, I read chapter 14 and 15 of the book The Science Behind Interstellar  by author Kip Thorne. The wormhole displayed in the move was what Thorne referred to as a "traversable wormhole". A traversable wormhole's properties that make it different than a normal one is that it contains exotic matter. A traversable wormhole can most likely only be created unnaturaly. This is because the only exotic mater that humans have ever encountered is when we created it in a labratory. Spacetime is converged when seen from outside of the wormhole, but diverged when seen from inside the wormhole. A simple mass will cause spacetime to be converged, such as the top of Figure 1, but the divergence of spacetime requires a negative mass, or negative energy, in accordance to Einstein's
1 comment
Read more

The movie Contact makes an effort to display a realistic representation of the Twin Paradox, but the fundamental concept of time dilation was displayed incorrectly. The time dilation in the twin paradox is a result of the point of view of a stationary observer seeing a clock move slower as it moves with a constant velocity past them. This can be portrayed in the diagram below:      Keep in mind that light in a vacuum will always travel at the speed of light [c], which represents the second postulate of special relativity. The second section of the illustration above represents the actual motion of a photon in both a moving inertia frame and a stationary inertia frame. The third section of the illustration represents what a stationary observer would see as the clock moves by them at a constant velocity. Notice how the distance that the photon actually travels (2d) is shorter than the distance that the stationary observer sees. To the stationary observer, the photon travels a l
1 comment
Read more

The Indiana Jones movie series is full of scenarios where characters use ropes, chains, and whips to swing from one place to another. From a physics perspective, this swinging motion is a perfect example of the law of conservation of mechanical energy. The law of conservation of mechanical energy states that the total potential and kinetic energy in a system will remain constant as long as the only forces that act on the system are conservative. This law can be written as follows: KE i +PE i =KE f +PE f Where the initial and final mechanical energy is measured at these points in the swing path: Classic Rope Swing When starting from rest in the initial position above, the only energy in the system is in the form of potential energy, since kinetic energy is associated with movement. At the bottom of the swing, there is solely kinetic energy in the system since the bottom of the swing path is considered at ground level. Therefore, the change in potential energy as it d
Post a Comment
Read more

Top Ten Examples of Bad Astronomy vs. The Martian

The film industry is notorious for defying the laws of physics, especially the laws of space physics. In  an effort to make scenes more action filled or possibly due to lack of physics knowledge, film makers will give space certain properties and characteristics that it does not possess. Philip Plait, also  known as "The Bad Astronomer", wrote a list named "Top Ten Examples of Bad Astronomy in Major Motion Pictures" which lists the ten most common mistakes that Hollywood movies make in displaying the physics of space.      I put the movie "The Martian" to the Bad Astronomy test and chronologically noted each time the movie tested an example that Philip Plait provided in his list. The first Bad Astronomy example that the movie tested was the fourth one, which speaks about the properties of light and lasers in space.      Philip Plait claims that movies wrongly show light propogating space as though space is filled with air particles and is no
1 comment
Read more

Is it Moral to Create Weapons of Mass Destruction?

November 03, 2019
One of the most appealing aspects of science is that it allows humans to excercise their curiosity. Many scientists remain curious because they often make discoveries that they never expected to discover. They also want to gain a better understanding of the universe around them; often forming theories and trying to prove them based on observation, or observing and making theories about natural laws that cause what they see to occur. But what is the fun in making weapons of mass distruction? What is the curiosity that they are trying to satisfy?       Science is also practiced because it is necessary to better human existence. We need research in science so that we can find solutions to new problems that pop up. Global warming, plastic pollution, and overpopulation are all things that we need new science to deal with. But what do we need to develop weapons of mass destriction for?            If someone needs to satisfy a curiosity of creating a weapon mass destruction, they
1 comment
Read more

Sir Martin Rees, the Astronomer Royal of the United Kingdom, gave a public lecture at the beginning of this month titled "Surviving the Century" in which he offered predictions about the future of humanity and the world changing problems we face. Martin Rees is a world leading cosmologist who gave this lecture not because he is an expert in the field of environmental science, but because he is in a position where he can spread awareness about the critical time we are in.  The topic that he claimed needs the most immediate attention is that of climate change and global warming. He asserted that the population growth in the world has increased 4.2 billion in the last fifty years, which is directly proportional to the worlds fossil fuel use. He stated " If humanity’s collective impact on land use and climate pushes too hard, the resultant ecological shock could irreversibly impoverish our biosphere", which is also causing mass extinction. He followed this statement u
1 comment
Read more

Weightlessness and the Normal Force

One of the most visually inspring aspects of space exploration is when we are able to witness astronauts interacting with the gravitational force different than that close Earth's surface. Humans have only witnessed outer space in places that have a low gravitational force, for example, the moon and the International Space Station.  Spacewalk on the ISS 1h:29m:25s for weightlessnes spacewalk scene This clip is of astronaut Andrew Morgan doing a spacewalk to make a repair on the ISS. Notice how his legs are floating behind him and he is seen at times clutching to the ship with a single hand to control his entire body. This is because Andrew and the ISS are undergoing a constant free fall directed to the center of Earth but are stuck in orbit around it. Free fall scenarios occur when the only force that is acting on an object is gravity. The difference between an apple falling out of a tree and an object experiencing free fall in orbit is that the object in orbit travels
Post a Comment
Read more
More posts